In another universe...or Chad goes north... 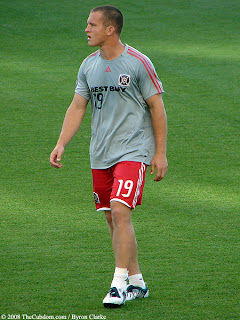 Ok, I am in a strange place mentally today.

Imagine that Toronto FC had instantly become the Barcelona of MLS and everything they had ever done had turned into football gold. Expansion draft day arrives for Montreal and their leadership says we must pick up all the ex-TFC players that we can, since their castoffs might still have some of the Toronto magic to them. Here goes-
Remember Montreal is allowed to pick 10 players in the draft and only one player per team.
Andy Boyens from Chivas USA
Dan Gargan (or Jon Conway) from Chicago
Carl Robinson (or Greg Sutton) from New York
Pat Phelan from New England
Maicon Santos from Dallas
Jeff Cunningham from Columbus
Tyrone Marshall from Colorado (they protected Joseph Nane)
Hunter Freeman from Houston
Chad Barrett from LA Galaxy
Kevin Goldthwaite from Portland
(there would still be Nana Attakora or Jacob Peterson - San Jose, O'Brian White - Seattle,)
There you have it, an all ex TFC expansion draft. The chances that any of these players will be selected by Montreal ? I would have to say slim.

Members of the Lakeshore choir

Mistake by the Lake TFC Followers